Electricity is an integral part of our lives, and we need it to power many of the objects in our life. Nikola Tesla first thought of transmitting this energy through the air. He planned to build large towers on the world that would transmit energy and power devices all around the globe. Unfortunately, it didn't work out to well and was never seen to completion. Since then, wires have been the status quo and we have accpeted them, along with batteries, as our energy providers. Yet, why has this become the norm, when batteries are bulky and only have a limited lifetime and wires are a tangled mess and a nuisance. In the past few years, new wireless technologies have been advanced but they were not ideal. First there is transferring with radio waves, which has been shown to work at very large distances. However, they don't provide a lot electricity; not enough to power most appliances. Charge pads have also come out, where a coil with a current will induce another near it to also have a current. This only works for small distances, i.e. inches, and dramatically loses efficiency as you move farther from the object.

A team at MIT decided to use magnetic resonance to achieve the wireless electricity goal. It was prompted because one of the researcher's wife's phone kept having a low battery beep during the night and it was waking up. To solve this problem, wireless electricity was born. 2 coils are used, just as the charge pads, but they work by different methods. Here, the coils are manufactured to resonate at the same frequency, allowing them to transfer energy very efficiently. This is very similar to an opera singer breaking a specific glass or aligning the frequency of you legs with a swing to get it started. When the frequencies are in sync, then the energy is transferred. The magnetic field caused by the first coil will only induce a current in the coil that has the same resonant frequency. Therefore, the energy is non-radiative because it doesn't do harm to anything with a different resonant frequency. Going back to the opera singer, only 1 glass will be shattered, while the rest will just sit there unharmed. Witricity holds many possibilities like eliminating cluttersome cords. Think of an airport with free wi-fi and witricity; there would be no plugs to fight over. This technology has already been proven to work, so hopefully in the next few years it will become commercially available and eventually the norm where we can look back at cords and laugh.

Here is a demo of Witricity and also an explanation.
http://www.ted.com/talks/eric_giler_demos_wireless_electricity.html
Posted by T, Coulther at 12:11 PM No comments:

In discussing the nature of the Universe, many people refer to it as "finite but unbounded," or even "curved." It is often difficult, particularly for those of with little knowledge of theoretical physics, to understand these concepts, but hopefully this post will help to illuminate their meaning.
When considering dimensionality, it is easiest to first consider the dimensions that we have "access" to - we are "trapped," after all, in the 3rd dimension, and thus cannot physically visualize any higher physical dimensions, but we can certainly think about them using the following analogy. Let's consider a 2-dimensional world, that for the purposes of this explanation we'll call "flatland," in which objects have only length and width, but no height at all. Now, consider what would happen if a 3 dimensional object were to enter this 2-dimensional world; it would exist in flatland in only 2-dimensions, and the residents of flatland would only be able to view the object in two dimensions as it passes through the plane. This must be utterly odd to flatland-ers, as they essentially see an object appear out of nowhere, rapidly change shape, and then disappear again into the nether.

Now, with this analogy in mind, let us consider the other direction of dimensionality - the 4th physical dimension. It is obviously not possible for us to visualize the 4th dimension, but think about it in the following way:

The 0th dimension, we can think about, consists of only a single point. Extend that point into a line, and we have 1 dimension - length. Take that line segment and move it at 90 degree angles to itself, and we have a 2 dimensional square. Take that square and move it at 90 degree angles to itself and we have a 3 dimensional cube, complete with length, width, and height. A cube physically has vertices all of angle 90 degrees, with lines of equal length. When this cube is visualized in 2 dimensions, as on a piece of paper, not all of the angles are conserved, and all of the lines are not of equal length. This is part of the penalty associated with losing a dimension. Now, what would happen if we were to take this 3 dimensional cube and carry it into the 4th physical dimension, in other words, connect each of its vertices at 90 degree angles of the same length? We cannot physically comprehend this object, called a 4-dimensional hypercube, or tesseract, in our 3-dimensional world, but we can visualize it's shadow in a 3-dimensional world, as seen above.
The questions this subsequently raises, are then: what if all 3-dimensional objects that exist in our perceivable universe are only the "shadows," left by 4-dimensional objects? We could never know if this were the case, because our perception is limited to the 3rd dimension. A 4th dimension (or 5th, or 6th, or 7th...) could very well exist, and we may just be blissfully unaware of its existence. The universe may well be curved into a 4th dimension, but we would not know or be able to comprehend this. This theory is fairly well accepted in the scientific community, and has future implications for determining how to "fold" a dimension through another to possibly allow for inter-dimensional travel, something often termed a "wormhole." Our universe may well be curved into other dimensions that we could travel through, but we are still quite far away from fully comprehending this.
Reference: http://www.youtube.com/watch?v=UnURElCzGc0
Posted by Neil Krulewitz at 2:13 PM No comments:

Javelin throwing has been a sport since the beginning of the Greek Olympics and spear throwing has been part of human societies for much much longer (400,000 years according to Wikipedia). Many factors factor into the flight of the javelin: the running speed of the thrower upon release, the torque generated by the thrower when twisting, the angle of release, wind speed and direction, aerodynamic lift and drag, air resistance, gravity, the type of javelin itself and many others. Because gravity is consistently acting on the javelin after release the thrower must do his or her best to maximize distance by trying to optimize the horizontal vector of their force with the vertical component of their throw to maximize distance.
Men’s javelins measure about 8.5 feet and 800 grams while those of women measure about 7.25 feet and 600 grams. In 1986 for men and 1999 for women the center of mass of the javelin was moved forwards about 4cm so that it would be further away from the centre of pressure (the point at which the aerodynamic forces of lift and drag act) which brings the javelin nose down earlier in flight, shortening the distance thrown. This also changed the optimum throwing angle from approximately 30°-32° to approximately 40°, causing more lift in the throw. In summation I hope that I’ve made it clear that there is much more physics to the art of javelin throwing than meets the eye. - Post written by Mike Reitano 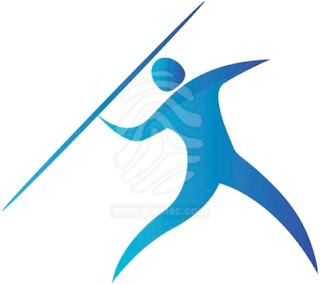 Posted by Rebecca Metzler at 7:21 AM No comments:

The Physics of Judo

Judo is a martial art that focuses on throwing and pinning opponents. The two main physics principles involved in a typical judo throw are center of mass and torque. A throw begins when a fighter pushes or pulls his opponent in order to move the other fighter’s center of mass out from over his feet. 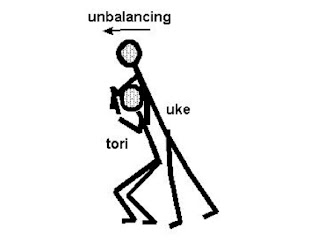 The person throwing uses torque, torque=rFsin(theta) by using his hip as a center of rotation and applies a force on his opponent to rotate him and throw him to the ground. 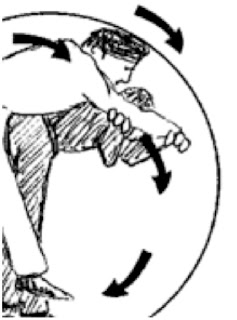 Post written by Gabe Lord
Posted by Rebecca Metzler at 5:24 PM No comments:

The Physics of a Rube Goldberg Machine

General Ideas:
-It is an overwhelmingly complex machine that is used to accomplish a simple tax (generally appealing to the eyes  to watch)
-Takes advantage of potentially all branches of physics
-Conservation of momentum/energy generally involved in most of the “changes” of the system
-Transfer of energy can potentially occur via any physics concept (a collision, fluid movement (flight, sailing), circular motion, projectile motion etc.).
Difficulties that arise:
The difficulty with setting up a machine with so many variables involved relates to the specific positioning/energy necessary to cause the machine to function as desired.  To make a Rube Goldberg machine function without issue, meticulous care to detail must be taken in calculations/design.
Example: OK Go Video
In the video, OK Go (along with Synn Labs) constructed a Rube Goldberg machine that, in the end, sprayed paint at the members of the band.  While filming for the music video, the band claims they had to reset the machine ~60 times in order to get a take that was viable for use on video.  This can be attributed to many external factors (room conditions, non uniform surfaces, etc.).
Video:
http://www.youtube.com/watch?v=qybUFnY7Y8w
The Rube Goldberg machine is a good way to look over the concepts we learned in Phys111 (especially considering that most of the concepts used in the video relate to classical mechanics). - post written by Thomas Mancuso
Posted by Rebecca Metzler at 7:38 AM No comments:

The Physics of Dogs and Cats Lapping Water

In 2010, MIT performed a study looking at the way that cats lap up water. Up to this point, it was believed that both dogs and cats formed their tongue into a “scoop” and brought the water to their mouths in this fashion. (http://www.youtube.com/watch?v=63Ch2pNkZwU)

However, one researcher realized that cats utilize a completely different technique. Instead of forming a scoop, cats will ever so slightly bend their tongue tip back and touch it to the surface of the water. Inertia and the cohesion of the water molecules enables the liquid to be drawn up into the cat’s mouth in a column. At a certain point, the force of gravity becomes greater than the force of the inertia. At the instant where the strength of these forces switch, the cat knows instinctively to close its jaws and capture the maximum amount of water. A cat can lap water 4x/sec and never ceases to close its mouth at the exact same moment. The MIT researchers confirmed this by building a robotic tongue and altering its lapping speeds. (http://www.youtube.com/watch?v=ht9bPJDlRFc&feature=related)

In May of 2011, another study was published that confirmed the cat data, but also showed that dogs do actually utilize the same method as cats. An x-ray video was used to illustrate this point, and it was found that the only reason dogs are so much messier at drinking than cats is because they stick their tongues into the water further down than cats. (http://www.youtube.com/watch?v=12paEIC7BkU)

Posted by Bianca Koerfer at 8:47 PM No comments: