The Physics Behind a Childhood Park Favorite: The SeeSaw

When I was younger, one of my favorite things to do at the park was go on the seesaw with my younger brother. Since he was younger than I was, he was also smaller and would always end up on the upper end of the see-saw. I always wanted to be on top and feel like I was floating in the air so one of my parents would have to add some weight to my brother's side so this could happen. I think it's fair to say that it is common knowledge that the person who weighs more will stay on the ground and the person who is lighter will be elevated. Physics perfectly explains this phenomenon through torque. 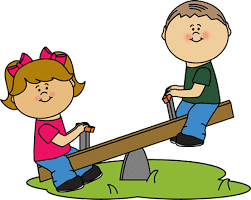 In order to maintain a balanced seesaw, the torques of each child needs to be equal. This means rFsinϴ of me must equal rFsinϴ of my brother. Since I mentioned my brother I had different weights our forces due to gravity would be different.  Thus, to make sure the torques are equal, the lever arm would need to be varied. With this larger mass and same angle of rotation, I would need to sit closer to the center of the seesaw so my lever arm, r, is smaller and my brother would have to sit closer to the outside to lengthen his lever arm in order to make our torques equal. 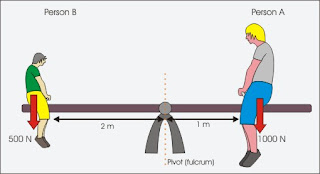 Since on a real seesaw the lever arms for both participants is the same, this explains why my brother would always be the one in the air and I was always on the ground. With the same r and theta the only difference was the force. Since I had a larger force I would have a larger torque and thus stay on the ground.
Posted by Ashreeta Yalamanchi at 1:44 PM