The IWF world championships for Olympic weightlifting is currently happening and so I decided to figure out some of the forces behind the Olympic lifts that I have been doing.

So for the snatch lift, we can analyze it through using torques. Essentially, the lift consists of a hip thrust which is a rapid pull of the back upwards and back, which pulls the arms and barbell and pops the barbell up to a certain height. Then, there is a quick catch, and then an overhead squat up until the barbell is directly overhead and the lifter is standing straight. 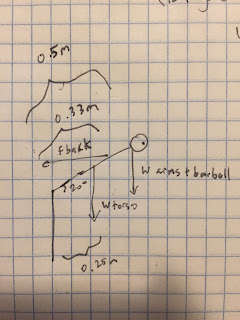 The first part of the lift can be analyzed through torque and rotation of the torso around the hip. I approximated my torso to be around 0.5 meters long, with a mass of 41kg, bending at a 20˚ angle. The weight of my arms and the barbell is around 88kg, pulling at an angle of 110˚. From a previous problem from physics, we learned about the erector spinalis muscle, which is the muscle I calculated the torque for rotating the back up/CCW. This muscle is exerting force at roughly a 12˚ angle in relation to the torso at roughly 0.33m from the hip. So now we can map out the torques pulling on my torso.

Looking at a recording of my lift, I estimated the average angular acceleration of my torso around my hip to be 1.85 rad/s^2. I also simplified my torso to a uniform rod.

So now if we sum our torques and set them equal to the moment of inertia and angular acceleration of my torso, we can solve for the force exerted by the erector spinalis muscle.

Now for the final part of the lift, the overhead squat. The barbell must be squatted up roughly another 0.5 meters. So we can use energy to figure out the force exerted by the body on the barbell to squat the barbell up. The total weight lifted by the legs are the total upper body and the barbell, which is 129kg.

These are just very crude and simplified estimates of the forces exerted by the body in order to execute these lifts, but they give us an idea of the great forces required to lift heavy barbells above the head in Olympic weightlifting. Looking at the professionals, who lift up to double of the amounts I lifted in this example, you can truly appreciate how amazingly powerful their bodies are.