The physics of cutting a tomato

When we say a knife is easy to cut something, we are actually talking about how sharp the knife is. Recently I watched a video about grinding a knife on Youtube. The guy in the video uses different polishing stones with different gradiants to polish a rusty knife he got. Then he tests how sharp the knife is by cutting a paper perpendicular to it and compares the effects using another knife from a dollar store. And this test turns out that the knife is actually quite sharp that the paper does not bend a bit to show a clear cut. He also does the following tests: to cut a leave floating on the water and successes, and throw a tomato to the knife to cut it, and it just works, which is amazing! (failed to catch the moment of cutting but tomato into two parts, as shown below) 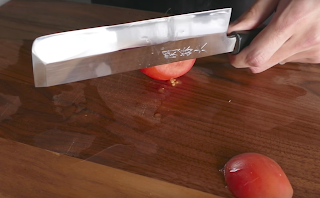 Link to the video (By Jun) if anyone is interested watching it: https://www.youtube.com/watch?v=3XW-XdDe6j0

Now I want to know more about the bevel when the tomato falls on it. First to generate the force acting on the knife by the tomato: gravitational force due to the gravity towards the center of earth. But first I need to get some data of the objects involved, mostly by estimation and gussing.

The mass of the middle size tomato: approximately 120g=0.12kg
width of the tomato touches the bevel: approximately 7cm=0.07m
The width of the eage of the bevel: searched online and found that a regular new knife for kitchen is arrroximately 20mm, depending on different brand, materials used, and manufacturers, etc. I will take 20mm=0.00002m

Since the pressure we got is quite large, it proofs the phenomenon that the tomato can 'cut itself by its' gravity.

However, after researching online, I found out that the sharpness is also related to the angle of the edge of the blade. The performance also relates to the angle of cutting. For this video, the the information we can access is fairy limited so possible we could extend out eyes into angles of the bevel in relation to the cutting performance, for example.