The Brilliance of Payet

In the world of football, superstars have come and gone through the ages. Moments of brilliance can define a players career while failures can leave them out on the periphery for the rest of their days. Dmitri Payet, a French player for the club West Ham United, had an explosive 2016 for his club and country, scoring some of the most incredible set piece goals that the audience has seen in recent years. While his free kick is very accurate and powerful, some argue they are able to be saved if the keeper is in the right position.
However, they do not understand the difficulty it requires. 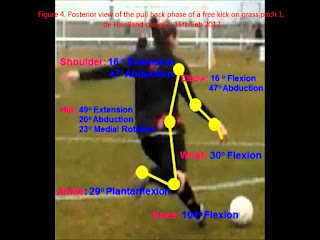 To look at Payet's skill and ability,  here is a look at the physics of one of his set pieces. 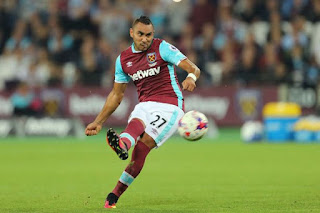 For a soccer ball of 0.43kg mass, and a circumference of 0.7 meters, with an average shot speed of 60 mph or 26.7 m/s, the challenge of stopping the free kick is quite large. Assuming an average foot is 1.45% of a persons body weight, Payet weighs 77kgs, and the ball is 0.43 kg and the ball is shot at 26.7 m/s, a conservation of momentum finds that Payet strikes the ball with a speed of 23 mph, 10.25 m/s. For a set piece from 20 yds out, 18.3 meters, it takes the ball between 0.7 and 1 seconds to reach the goal. Similarly, Payet is well known for striking the ball off center and inducing a spin, much like David Beckham. For his shot at 26.7 m/s, using the relationship w=v/r, the ball would also have an angular velocity of 242.7 radians/sec. This angular velocity and rotation also leads to the ball moving side to side, often from the left to the right as seen by the goalie that is facing Dmitri Payet. One set piece from around 20 yards was measured to have moved 6 feet from left to right, making it even more difficult for the goalie. Even if the goalie judges the flight of the ball correctly and in time, he must still exert a force of over 100 N or 25 lbs of force in order to stop the ball, using the formula of Ft=p. Only by exerting this force or greater can the goalie hope to establish static equilibrium and stop the ball from going into the goal. Therefore, all in all, if Payet is accurate on the day, there is little to no chance you are stopping his shot. And your team is down 1-0.