The ‘freak’ freekick versus the goal that defied physics: An analysis of Roberto Carlos’s freekick and Papiss Cisse’s wonderstruck

“I'd practiced in training but I've never seen a ball do what that one did. I had no idea how I did it - I still don't. I've never taken one like it since and there is no explanation. It was an impossible goal.” These were the words of Roberto Carlos after his famous freekick against France in 1997 during the Le Tournoi, a tournament in prepartation of the 1998 World Cup.

15 years later a prototype of Carlos’s strike was repeated by an African wonderkid known as Papiss Cisse in an unforgettable night that saw Newcastle stun Chelsea in London –  http://soccer-portal.org/goal-of-the-day/7348-cisse-goal-v-chelsea.html 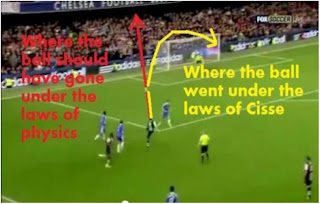 http://www.101greatgoals.com/blog/the-laws-of-cisse-explaining-papiss-dembas-wonder-goal-for-newcastle-at-chelsea/
Interestingly enough it turns out that there is indeed an explanation of what happened on that memorable night in the Stade de Gerland, Lyon, and that the Law of Cisse does subscribe to the laws of Physics. 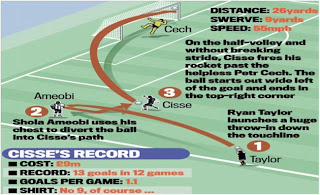 Carlos kicked the ball using the outside of his lethal left foot, thereby giving the ball a wicked anticlockwise spin. This meant that the ball was not only moving away from the 4-men wall, but the goal too. In the case of Cisse, he struck the ball with the outside of his right foot and the ball seemed destined to be heading towards the stands. So in both cases how did the ball curve back into the goal in such a dramatic and seemingly impossible manner. Physicists have explained this phenomena using the Magnus effect. Whenever a ball is spinning through the air, the Magnus force will push it in a direction that is perpendicular to the direction of motion of the ball. The ball spins in the same direction as the airflow above it (left side of the ball in the image below), and in the opposite direction at the bottom of the ball (right side of the ball in the image below). The presence of friction between the top of the ball and the air above it causes the air to be dragged around the top of the ball (left side). Thus, the air is deflected downwards (to the right). At the bottom of the ball (right side), the air stream comes to a rest instead of being deflected upwards (to the left) since the air and the ball are moving in opposite directions. The net result is that the ball deflects the air downwards (towards the right), and according to Newton's 3rd Law, the air exerts an equal and opposite force onto the ball which will act upwards giving rise to the Magnus lift force which then accounted for the ball being deflected back towards goal.

Another explanation involves Bernoulli's principle. The air travels faster on the side where the spin of the ball is in the same direction as the air. The faster the air, the low the pressure on that side (left side of the ball). Pressure increases on the other side of the ball (right side), where the air is in opposite direction of the spin on the ball, hence the air travels slower relative to the center of the ball. There is an imbalance in the forces on two sides of the ball (left and right), resulting in a net force acting towards the left side of the ball, and this creates what is referred to as the Magnus lift force which is then responsible for giving the ball the spin that allowed it to swerve back towards goal. 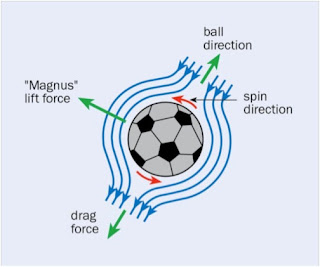 Posted by Rebecca Metzler at 8:26 PM