The Physics Behind The Turntable Stylus

The Physics Behind The Turntable Stylus 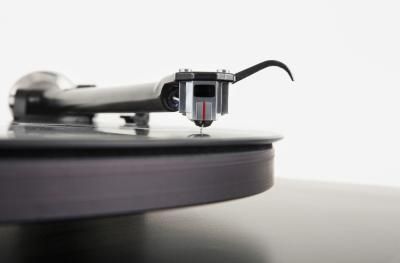 Alright, so I'm somewhat of a nerd when it comes to music, and my preferred method of listening is vinyl on a turntable. After a couple of years of collecting albums and having to maintain my equipment, I've become curious about the kinds of forces that act upon records and needles. So, here's a look at the physical world of analog music.

The angular velocity of an LP is calculated as follows:

At the outermost point of an LP, the linear velocity is:

The force itself is a bit tricky to calculate. Typically, a turntable's tonearm is like a fulcrum, such that it is balanced so that only a portion of the tonearm's weight is applied to the record itself (this is called a tonearm's effective mass). This value varies drastically between turntables, anywhere from less than 10 grams to more than 25 grams. After some research, I've approximated my tonearm's effective mass to be roughly 16.5 grams (0.0165 kilograms). We know force is mass times acceleration, so:


This may seem like a small force, but this force is concentrated at a very small point (the stylus tip) and acts constantly on this point for an entire album (which is roughly 23 minutes per album side). So even though this seems like an insignificant force, it really begins to add up after playing albums for long periods of time. Styluses are generally made of diamond, so it may seem surprising that these tips even wear out at all. But because the area of contact between the diamond tip and the vinyl groove is so tiny, the forces that act upon the stylus are massive in comparison. Interestingly enough, there is a tremendous amount of heat generated at the contact point between the stylus and record, and the particles that are found in a record groove is most commonly silicon dioxide, a substance nearly as hard as diamond. So over time, these interactions will actually wear down the "needle" quite significantly. Whoever said "Diamonds are forever" clearly did not own a turntable! 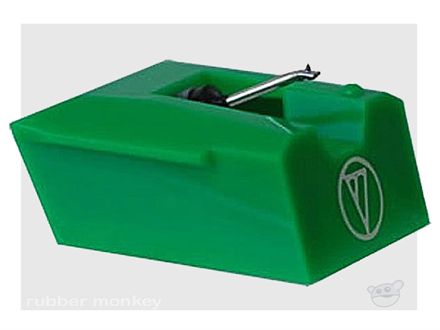