The Physics of the Olympic Swimming Starting Block

In this race, swimmers started by pushing off of a starting block.  The new Olympic starting blocks have a wedge at the back to allow the swimmer to push off of the wedge.  The forces on Allison Schmitt while she was on the starting block were FN, Ffriction, and Fgravity.  The normal force and frictional force have x and y components because the block is angled toward the pool.  The coordinate system is up = +y, down = -y, left = +x, right = -x. 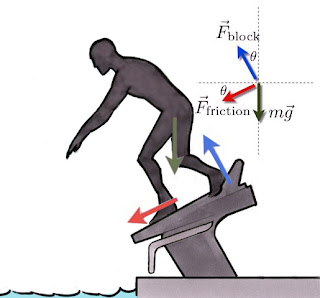 The old Olympic swimming starting blocks did not have a wedge, and were just a flat block.  The forces acting on Allison Schmitt would be the same for the old starting block, but her starting acceleration would be slower because the wedge is missing. 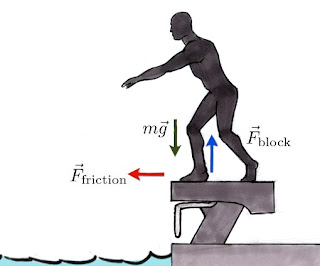 The addition of a wedge to the Olympic swimming starting blocks has allowed swimmers to increase their starting acceleration, which allows them to decrease their racing time and set new Olympic records, just like Allison Schmitt did in the 200m freestyle.