This weekend, to avoid both of our heavy loads of work, my High School Senior brother and I facetimed to catch up (and gossip about how our 7th grade sister went on a date 🙊). We ended up talking about our Christmas lists where Matthew proceeded to tell me how he wanted a Go-Pro to capture videos while scuba diving. This, while really cool, also sent me on a spiral of watching crazy go-pro stunt videos like so:

Now weirdly enough, this crazy jump video reminded me of the Disney movie Frozen. Mostly because in both watching both I found myself uttering "how are you not dead right now?!"
If you don't know what I am referring to, there is a scene in Frozen where Anna, Kristoff, and Olaf are running around from a giant marshmallow-esque monster and decide to repel off of a nearby cliff (great idea guys!.... NOT). 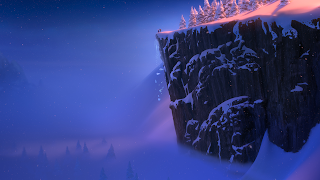 After Kristoff and Anna begin to repel off of the cliff unfortunately they are stopped by the monster who proceeds to pull them back up. (start 2:21)

First debunking of this scene. Kristoff says that the cliff is about 200 feet tall which converted to meters is about 60.96m. However the marshmallow monster pulls them above the top of the cliff, likely adding 10 more meters to their freefall. So estimating their initial velocity as 0 m/s and using the equation:
Xf-Xi = Vot + (1/2)at

we would find that their fall should be

However, their fall only lasts 5 seconds...

Lets assume there is actually 20 feet of fresh snow at the bottom of the cliff. This means that Anna's specific impact velocity would be equal to:

Now Anna lands in the snow with this impact velocity and decelerates over about one meter of snow. Would she survive this?

which calculates to be about 50gs. Many people estimate that serious injury and death can occur at anything over 25 gs so the fact that Anna walks away from this is absolutely bonkers (maybe landing on her feet helped? lol)

What I have learned from this? Don't anger my sister so much she sends an ice monster after me.