I recently had to go to a film screening for my Legacies class that was on the Trial of Socrates. The video mentioned a device known as the Clepsydra that was used to measure the time of speeches. The Clepsydra was a bowl that had a small hole on the bottom that was used to drain the water out. When the bowl was empty, the speaker had run out of time. 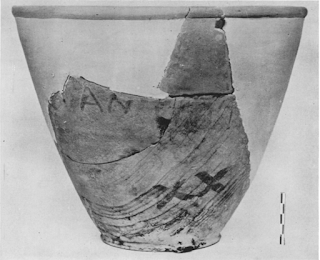 I wanted to see if there was any way that I could figure out how much water was needed for Socrates’ speech. To do this, I figured out that his speech would have been about 70 minutes long (assuming a speaking rate of 120wpm). With this I figured I could use the volume rate of flow equation and Bernoulli’s Law to find the change in volume.

Because both the top of the bowl and the hole at the bottom are open, the pressure would be only atmospheric and would cancel each other out.

The density of the water remains constant and can also be canceled out.

With a quick google search, I found out that archeologists have found an actual clepsydra that was used in the Athenian courts (http://www.ascsa.edu.gr/pdf/uploads/hesperia/146678.pdf) . It’s possible that this may have been used for Socrates. This gave me the dimensions of the clepsydra used. H=0.232m and diameter of bottom opening=0.004m. Thus,

This would only be the initial velocity because as time progressed, the height would decrease and the volume would as well.  Using only the initial height, over a 70 minute period 27m3 or 27000L. This is an insanely high number. This shows how important it is to be able to account for a change in height. It also suggests that this may have not been the clepsydra used or that they had to refill the bowl many times
Posted by kdillon at 11:09 AM