For centuries, inventors have attempted to create perpetual motion machines. Unfortunately, friction always seems to get in the way. I read a book this summer called Maxwell’s Demon: Why Warmth Disperses and Time Passes by Hans Christian Von Baeyer that discussed the possibility of building a machine that could harness Brownian motion to lift a weight without depleting a source of energy. The Brownian ratchet, or “ratchet and pawl,” perpetual motion machine was popularized by Richard Feynman in the Feynman Lectures, and is shown below in Fig. 46-1. 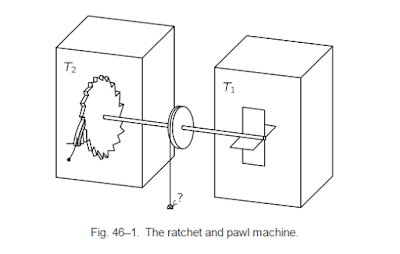 How does the ratchet and pawl machine work?
The particles in the container on the right would move randomly because they are not at absolute zero. They would hit the vanes attached to a rod that can rotate. The particles colliding with the vane would cause the rod to vibrate counterclockwise and clockwise with Brownian motion. In order to harness the Brownian motion, the other side of rod is attached to a ratchet and pawl that make it so that the rod can only rotate in one direction. The rod would theoretically rotate in one direction such that it could lift a small mass, thus generating potential energy without depleting an energy source.

Why doesn’t the ratchet and pawl machine work? 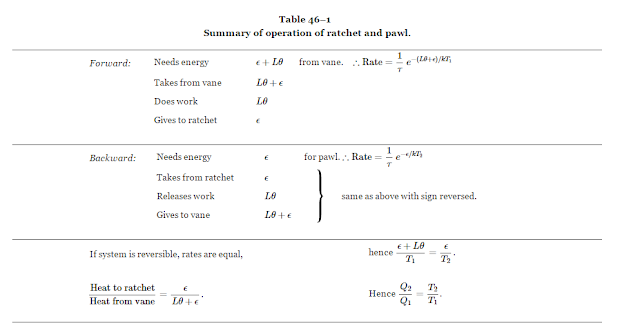 http://www.feynmanlectures.caltech.edu/I_46.html
L is the torque on the rod from the weight. ϵ is the amount of energy needed to lift the pawl off of the ratchet so that it can move forward or backwards. It can come from the vibrating particles colliding with the vane or it can come from the ones directly lifting the pawl. In order to rotate one step forward such that the weight rises, Lθ work must be done to raise the weight, and ϵ work must be done to raise the pawl such that the ratchet rotates. The total amount energy provided by the vane in this case is Lθ + ϵ. When the system moves backwards, Lθ + ϵ energy is given back to the vane. If the energy threshold is the same on both sides, and the average energy of the particles is the same because of the two containers having the same temperature, then the mechanism should move forward and backwards with equal probabilities.

The ratchet and pawl machine could actually work:

If the temperatures are different in the two containers, specifically such that the container on the right has a higher temperature, then the ratchet and pawl setup would successfully turn the rod. However, the friction of the ratchet and pawl in the colder container would heat up that container until it was the same temperature as the other container. At that point, the machine would stop raising the weight. Interestingly enough, this type of heat gradient is essentially how all reversible engines work, and it does not violate conservation of energy.
Unfortunately, it appears that it is impossible to build a perpetual motion machine, even if you really really want to. Either the work done on the weight requires using up a temperature gradient, or in the case that there is no temperature gradient, no work is done on the weight at all and no gravitational potential energy is created.