If you have ever driven on the roads in New York, you know they are horrible. Asides from potholes, often seen in the winter months, the roads experience a lot of warping. This is the result of having all four seasons: there is a large variation in temperature between winter and summer. In the summer when it is hot out, the concrete molecules of the road expand and  in the winter when temperatures drop below zero, the molecules contract.

The equation above solves for the change in length which is equal to the coefficient of linear expansion multiplied by the original length of the object multiplied by the change in temperature in celsius.
Assuming the original length (Lo) of the concrete is 200 m long, and our coefficient of linear expansion (α) is about 10.5 x 10-6 1/°C (source: Federal Highway Administration), we can calculate the expansion of the concrete (ΔL) as a result of a temperature change (ie. 5 °C). The calculated change in length would then be: 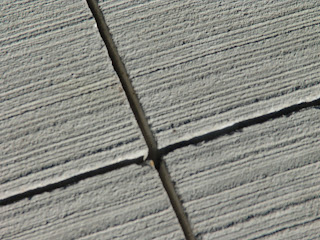 
https://www.fhwa.dot.gov/publications/research/infrastructure/pavements/pccp/thermal.cfm
Posted by Unknown at 11:22 AM