One of my favorite things to do during my study breaks at the library is to watch random clips on youtube to clear my mind. A personal favorite of mine to watch is the show American Ninja Warrior - which actually induces a lot of thought about physics. This past summer Jessie Graff, a stunt woman for the show super girl and a previous college pole vaulting champion, was the only woman of the year and one of the only women ever in the competition to make it to the national finals. Whenever a woman makes it far in one of these courses it becomes a national sensation due to the sheer strength it takes alongside the intensity of knowing what the physics is behind your motion on all of the obstacles. I am going to discuss one of my favorite obstacles: The Spinning Log 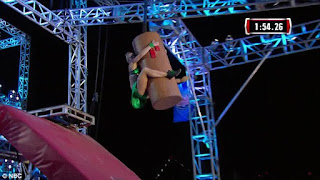 For the spinning log the idea is to hold on to the log while it rotates, falling off meaning instant disqualification. This log has both linear and angular acceleration as it moves down an incline. As the log rolls down the 15 degree incline the angular velocity increases. Since we can relate the acceleration of this log interns of centripetal acceleration we know that if the angular velocity doubles the angular acceleration quadruples (aR= (w^2)(r)). In order to stay on the log as it is rotating there must be a force pushing an individual towards the center of the log (which we can assume is provided by the person's grip). According to official sources the log is about 40 cm in diameter meaning the radius is 20cm (0.20m).  In the .gif above using the time clock it seems as if the female competitor rolls at a speed of 2 rev/second at the bottom of the run which we know we can convert to radians using 1 rev = 2pi radians. This gives us a final angular velocity of 12.57 radians.

This is a lot of force to grip on the log with especially when they add bumps to the path and random drops. In later competitions this obstacle was made a lot harder by making the log thinner with a smaller radius and more rotations per second - which disoriented competitors more.

Check out Jessie Graff kill it: